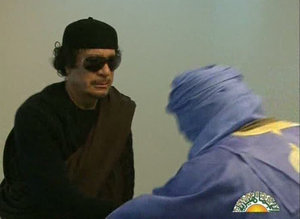 Panos Moumtzis says more than a half dozen U.N. agencies have returned to Tripoli to address the country's humanitarian needs since fighting in the capital waned last week.

In an interview late Thursday, he said the U.N. has brought in 11 million bottles of water and will bring in 600 metric tons of food and 100 million euros worth of medicine.

Panos said, however, that he sees the U.N. aid as temporary, and that he expects oil-rich Libya to be able fund its own recovery starting in 2012, according to ABC News.

Reams of confidential documents reveal the mounting desperation and disarray among top leaders of Col. Muammar Gadhafi's regime as power slipped through their fingers, The Wall Street Journal reported Friday.

The files were discovered in the office of Libya's spy chief in Tripoli and two other security agencies after the personnel fled their desks as civil war deepened.

The documents expose an ossified culture within Libya's police state that proved largely incapable of switching gears to fight an actual war. Propaganda skills failed to translate into battlefield analysis, leaving soldiers furious and, in some cases, surprisingly clueless.

In one memo, dated April 26 and found in the now-abandoned office of Libya's former top spy, a general complains bitterly about the lack of intelligence.

"I received no information from anywhere," he wrote. "I now think there isn't any entity at all that has precise or even imprecise information" about the rebels he was being asked to defeat, says Fox News.