More than 10,000 freed from Gaddafi's prisons 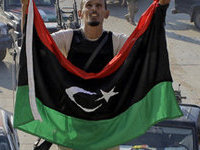 But Ahmed Bani said that some 50,000 people are unaccounted for.

Gadhafi's regime sought to break the uprising that broke out in mid-February by locking up thousands of people. Many have been released, but evidence has emerged that regime forces executed dozens of prisoners as rebels seized the capital according to CBS News.

In one case, Khadafy fighters opened fire and hurled grenades at more than 120 civilians huddling in a hangar used as a makeshift lockup near a military base, said Mabrouk Abdullah, 45, who escaped with a bullet wound in his side.

Some 50 charred corpses were still scattered across the hangar yesterday.

New York-based Human Rights Watch said the evidence it has collected so far "strongly suggests that Khadafy government forces went on a spate of arbitrary killing as Tripoli was falling.''

The group said it has evidence indicating regime troops killed at least 17 detainees in another improvised lockup, a building of Libya's internal security service, in the Gargur neighborhood of Tripoli. A doctor who examined the corpses said about half had been shot in the back of the head and that abrasions on ankles and wrists suggested they had been bound.

The group spoke to Osama al-Swayi, who had been detained there, along with 24 others, says Boston Globe.

"We were kept in a small room two metres wide. First six weeks we were five people. We stayed in this room. We couldn't even move. At night we couldn't sleep."Tabib said he was tortured for nine days after being arrested."They used electricity power. They used to beat me with sticks," he said."I couldn't see what type of sticks because they covered my eyes all the time. I couldn't see the people. I couldn't see what they were using."He said while he was being tortured, he was asked about phone calls he had made to friends outside Libya."They were asking all the time, that you are dealing with NATO, you are not just calling your friends," he said."That's what they wanted me to say, that we are professional, we are dealing with NATO, we are dealing with military."And this was not true... I was just calling old friends and trying to tell them to inform the media about what's happening in Libya", reports ABC Online.