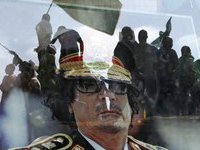 Despite dramatic rebel strides and momentum, pro-Moammar Gadhafi forces toughed it out on Wednesday, striking back at Libyan rebels in several volatile pockets across Tripoli.

Fresh clashes between rebels and loyalists broke out Wednesday outside the Rixos hotel, where about 35 international journalists were trapped, says CNN.

Government forces still have control of the Rixos hotel, about a mile from Bab al-Aziziya, where dozens of foreign journalists and one former U.S. congressman are being prevented from leaving by armed government enforcers.

Rep. Walter Fauntroy, who served as an at-large delegate for Washington D.C. until the 1990s, has been in contact with his wife and says he's safe, according to the Washington Post.

The situation at the Rixos reportedly grew increasingly tense overnight, with a loyalist guard pointing his rifle at one journalist before standing down. There are also reports that pro-Gaddafi forces may be firing from the roof of the hotel, informs CBS News.

Raids also targeted his own headquarters in Tripoli. One raid killed his youngest son and three grandchildren. It was not the first time that the West had killed a Gadhafi family member.

President Ronald Reagan called Gadhafi a "mad dog" and sent warplanes to bomb his Bab al-Aziziyah compound in 1986, after the bombing of a West Berlin discotheque he blamed on Libyan agents. One of the 60 people killed was Gadhafi's adopted daughter.

Gadhafi used the Tripoli building bombed in the raid, left unprepared for 25 years, to deliver one of his first defiant speeches of the war, standing beside a memorial in the shape of a giant metal fist crushing an American warplane, reports msnbc.com.