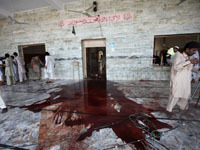 A suicide bomber struck a mosque in a Pakistani tribal region during Friday prayers, officials said, killing at least 40 people and wounding 85 others in the deadliest attack in the country in recent weeks.

The attack came during the holy month of Ramadan, a time of fasting, sharing and heightened community spirit for Muslims, says Atlanta Journal Constitution.

The bomb erupted at the end of the main weekly prayer service at the mosque in Ghundi, a village in the ethnic Pashtun tribal region near the Khyber Pass. It left 117 people injured and rescue workers were moving victims to hospitals in the nearby provincial capital of Peshawar, said Mujahid Khan, a spokesman of the Edhi Foundation rescue service.

The blast was triggered by a suicide bomber, said Sadeeq Khan, a political officer of the Khyber district administration, who was reached by phone, informs Bloomberg.

The Pakistani Army has waged multiple operations in Khyber aimed at pacifying the region but with limited success. Khyber also is a crucial region for the United States and NATO because a large portion of nonlethal supplies heading to American forces in Afghanistan passes through it.

The village where Friday's attack occurred sits on a highway linking Pakistan to Afghanistan, a main conduit for the oil trucks and NATO convoys that are frequently the targets of militant attacks.

A suicide bomber had previously struck a different mosque in the same part of the Khyber region in March 2009. That attack, also during Friday prayers, left more than 50 people dead, according to New York Times.