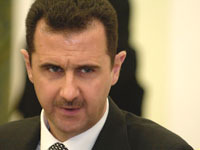 President Obama has now called on Syrian President Bashar Assad to quit. But if he did, or if he is toppled, who would replace Assad?

There's no clear answer. Assad and his late father, Hafez Assad, have ruled Syria for four decades and have not tolerated anything that resembles a genuine opposition inside the country's borders.

"There is no opposition in Syria. There are opposition groups," said Lebanon's Wissam Tarif, who has been a prominent campaigner for democracy and human rights in the Middle East, says NPR.

But the diplomacy left many questions unanswered, including how the demand for his ouster can be backed up in the absence of any appetite for military intervention, and who might take his place.

The messages from Washington, London, Paris, Berlin and Brussels coincided with a United Nations report recommending that Syria be referred to the International Criminal Court for investigation of possible crimes against humanity.

Much of Syria was quiet Thursday, although activists reported intense shooting around noon in the flashpoint city of Latakia.

Syria's UN Ambassador Bashar Ja'afari accused the U.S. of waging a "humanitarian and diplomatic war" against his country in order to instigate further violence by sending "the wrong message to the terrorist armed groups that they are under American and Western protection", according to Detroit Free Press.

Mr. Obama also froze all Syrian assets under American jurisdiction, barred Americans from doing business with the Syrian government and called for sanctions by other countries.

"Our allies in the Arab League and Turkey have extensive diplomatic and economic ties to Syria, and can exert a powerful influence on Assad's regime," Mr. Casey said. "I strongly encourage members of the international community to lend their voices to this growing chorus, and publicly declare their opposition to the Assad regime and its brutal treatment of the Syrian people", informs Scranton Times-Tribune.