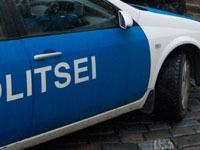 There has been a shooting inside the Estonian Defense Ministry in downtown Tallinn, officials said Thursday.

Spokesman Peeter Kuimet said Thursday that there had been an "incident involving guns" inside the ministry and that police are on the scene.

Martin Jasko, a spokesman for the government, said all employees have evacuated the building and police have cordoned off the surrounding area.

The Postimees, a leading daily paper in Estonia, is reporting on its website that the shooter may have taken a hostage inside the ministry, according to NPR.

Estonian police received the first call about the shooting at 1510 EET, BNS reported. A police spokesperson said the building has been evacuated by police and that the area has been sealed off.

Estonian police forces are currently "establishing circumstances of the incident," according to the police spokesperson, says Wall Street Journal.