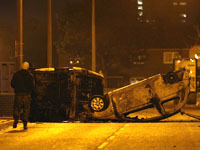 Still reeling with shock and anger over the worst rioting in decades, Britain has turned to a tough reckoning with the perpetrators, with courts sitting through the night and the police saying Thursday that over 1,200 people had been arrested, the bulk of them in London.

But, despite an apparent lull in the rioting that has ravaged London and other major cities, concern was growing about many of the ethnically segregated districts battered by the rampages, particularly Birmingham, Britain's second-largest city, where the police and political leaders worried about a potentially explosive new pattern of interracial violence that could be set off by the past days and nights of mayhem, reports New York Times.

Police continued to make arrests linked to the disturbances, with the number of arrests in London alone climbing to 820. Courts were staffing around the clock to process alleged looters, vandals and thieves - including one as young as 11.

Even as Cameron promised not to let a "culture of fear" take hold, tensions flared in Birmingham, where a murder probe was opened after three men were killed in a hit-and-run drive as they took to the streets to defend shops from looting, says San Francisco Chronicle.

Outside the capital, in England's second-largest city, Birmingham, police started a murder investigation into the deaths of the three men hit by a car. Residents said the dead men, ages 21 to 31, were members of Birmingham's South Asian communities who had been patrolling their neighborhood to keep it safe from looters.

"They lost their lives for other people, doing the job of the police," witness Mohammed Shakiel, 34, said. "They weren't standing outside a mosque, a temple, a synagogue, or a church - they were standing outside shops where everybody goes. They were protecting the community",  informs Philadelphia Inquirer.