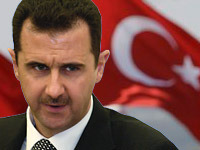 President Bashar Assad of Syria rebuffed an appeal from Turkey yesterday to end the crackdown that has emerged as one of the bloodiest chapters in the Arab uprising and has plunged his country into its deepest isolation in years.

Assad said in a statement after a six-hour meeting with Turkey's foreign minister, Ahmet Davutoglu, that his government would press ahead with its fight against militant Islamists, the term the government has often used to describe the instigators of an uprising that began in March and has posed the gravest challenge to Assad's rule, informs Boston Globe.

The United States, European and Latin American nations, Turkey and Arab states all have criticized the offensive that's turned nightly news from Syria into a montage of dead protesters at an especially sensitive time, during the Islamic holy month of Ramadan. Still, none of those players - and not even Israel - has called for Assad's ouster, apparently out of fear over who would replace him.

Analysts say the reason for the hesitancy lies in Syria's touchy sectarian demographics and the lack of a cohesive opposition that could result in a protracted civil war were Assad to be toppled suddenly, according to Sacramento Bee.

As part of the effort, international legal experts also held a workshop in Turkeylast month to train Syrian activists in how to document alleged crimes against humanity, said Nabil Halaby, a Lebanese-based human rights lawyer who is part of the project. A report detailing the unnamed group's findings is scheduled to be released to governments, human rights groups and the media by the end of the month, reports Los Angeles Times.