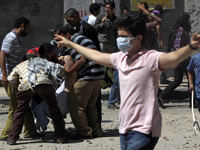 Egyptian pro-democracy activists on Tuesday called from a mass march in Cairo to push for political change, a day after the prime minister offered concessions which were criticised as falling short.

The march is to leave from Tahrir Square, epicentre of protests that toppled president Hosni Mubarak in February, at 6:00 pm (1600 GMT) headed for the cabinet headquarters, activists said on Facebook, AFP says.

Brokers attributed the declines to investor fears about the continuing protests in Cairo and other Egyptian cities, with demonstrators calling for the removal of police officers allegedly implicated in the death of more than 950 people during the uprising that ousted former President Hosni Mubarak.

"The sales pressure shows that people are unloading because of fears about the protests," said Ahmed Hanafi, head of research at Gothour Trading, Washington Post reports.