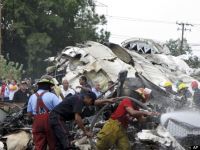 A passenger aircraft with 112 people on board has crashed at Kisangani airport in the Democratic Republic of Congo. Recent reports from the area indicate that there are around 40 survivors, which would indicate a death toll of around 70. The aircraft was trying to land when it crashed.

The survivors were pulled out of the wreckage by rescue workers.

The airplane was caught in bad weather near the airport. Eye witnesses at Kisangani airport report that the pilot was trying to land in deplorable atmospheric conditions but did not reach the runway.

The aircraft belonged to the Congolese air company Hewa Bora, which operates scheduled flights from the capital of DR Congo, Kinshasa, to Kisangani in the centre of the country and other cities. The fleet has eight aircraft. Safety reasons put this airline on the European blacklist of operators.

The last air disaster in this central African country was in August 2010 when a crocodile escaped from a bag and caused a panic in which the passengers and cabin crew stampedes to the cockpit, whereupon the pilot lost control of the aircraft. There was one survivor. Twenty people died.