Casey Anthony to be jailed for one week 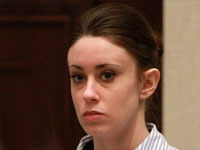 Casey Anthony, who earlier this week was found not guilty of killing her daughter, was sentenced yesterday to four years in jail for lying to investigators but will be released July 17 after getting credit for time served.

Her case has riveted much of the country, which became entranced by tales of a duplicitous young mother who was said by prosecutors to be more interested in bar-hopping than caring for her child, says Boston Globe.

It was not immediately clear where Anthony, 25, would go after her release. She lived with her parents in Orange County, in Florida, before her 2008 arrest in connection with the death of her daughter, Caylee Marie, 2, but part of her trial defense was that she had been abused by her father and that her family was dysfunctional.

Anthony was fined $1,000 and sentenced to the maximum term of four years for each of the misdemeanor counts of lying to law enforcement officers investigating Caylee's disappearance and death. Anthony showed no visible emotion as her sentence was being read, but had been smiling and talking to her lawyers beforehand, informs San Francisco Chronicle.

The verdict sends several important messages. One is that the protections our justice system offers the innocent can occasionally let some people who are presumed guilty go unpunished, but it's better that way than the opposite. The other is that no one can afford to get it wrong when there's a death penalty. As Ford said on Nightline, "If they want me to take someone's life, they have to prove it - or else I'm a murderer too."

If the jurors did err on the side of letting Anthony go because of that, it's yet another reason governments shouldn't be in the death business. Judging from public reaction, many people, had they been on that jury, would have risked sacrificing an innocent life because they disapproved of her behavior.

So what do we do with all the energy and outrage we developed on Caylee's behalf? Mayber we should put it toward looking out for the countless other children still alive who are homeless, in poverty, abused or neglected and need our help, according to DesMoinesRegister.com.