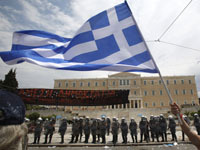 A single roll-call vote on the implementing legislation is expected at around 1100 GMT, but with deputies also being allowed to express their support or dissent for individual articles in the legislation.

Greece's international creditors-the European Union and the International Monetary Fund-have made passage of the overall austerity plan and implementing legislation a precondition for Greece to receive any further aid, according to Wall Street Journal.

Greece's parliament is set to approve a final austerity bill needed to secure 12 billion euros ($17 billion) of international aid later in the day after Wednesday's success in passing the first hurdle.

Athens's latest efforts helped remove some near-term uncertainty in the market, offering some respite to a quarter when global equities and commodities suffered losses.

Concerns that the U.S. and Chinese economies are slowing also weighed on financial markets this quarter, with world stocks measured by the MSCI All-Country World Index down 1.2 percent in April-June -- on track for the benchmark's first quarterly loss in a year, says Reuters.