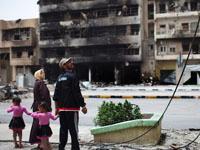 Nearly three months into NATO's bombing campaign, Moammar Gaddafi's government churns out daily propaganda about the alliance supposedly inflicting civilian casualties. Last week, it said that 718 people had died from mid-March to late May and that 4,067 had suffered significant injuries, according to Washington Post.

NATO military craft appear to be increasing the frequency of their strikes around the capital, the stronghold of Khadafy's four-decade-old regime. Khadafy also faces a four-month-old rebel insurgency, several defections, and a naval blockade.

In Brussels, NATO Secretary General Anders Fogh Rasmussen said he would use a meeting tomorrow with the alliance's defense ministers to demand that more countries contribute to the fight against Khadafy. He did not mention specific nations. Britain and France have been heavily involved since the mission started in March, says Boston Globe.

16:53
Yulia Tymoshenko comments on her new image
16:04
Russia readies to test direct-acting drug against COVID-19 in humans
14:59
The Message of Judas and the Black Messiah
14:36
The power in rejecting
14:14
Kremlin responds to Biden's 'Crimea is Ukraine' statement
20:20
USA wants to snatch keys to Africa away from Russia
19:10
Joe Biden leaves no hope for building cooperation with Russia
18:31
Japan prepared to attack foreign ships near Senkaku Islands
16:07
Biden administration chooses to strike Syria first
14:57
Ukrainian President Zelensky addresses Russia
Europe
Will there be a new Berlin Wall between Russia and Europe?