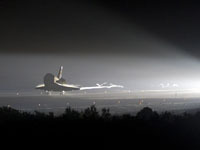 Space Shuttle Endeavour has touched down safely at the Kennedy Space Center at 2:34 a.m. ET, ending its last mission.

After 19 years of operation, the US space shuttle will be retired along with the rest of Nasa's shuttle mission which is terminating later this year.

Endeavour is the youngest of the space flying fleet, which also includes Discovery and Atlantis.

With Discovery already retired after returning from its final mission in March, Atlantis will be the last US shuttle to launch from the Kennedy Space Center in July.

After the shuttle era, the world's astronauts will rely on Russia's space capsules for transit to the orbiting lab at a cost of $51 million (£31 million) per seat until a new US crew vehicle can be built by private enterprise.

Nasa has estimated that a shuttle replacement could be expected sometime between 2015 and 2021, says .