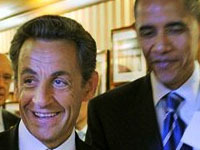 G8 leaders has promised $20bn (£12bn) of loans and aid to Tunisia and Egypt over the next two years and suggested more will be available if the countries continue on the path to democracy.

David Cameron revealed he had intervened to prevent the package from being presented as more generous than it was in reality, suggesting that some at the G8 had wanted to present it as worth as much $40bn, informs.

"We're busy assessing where the needs are, but one thing is clear, the needs are huge. Before we invest, these countries also have to show that they are continuing on a democratic path. We have to see democratic progress. We'll be looking at all that as part of our assessment before we put any money in," reports.

However, leaders did not specify timetables or how much individual countries would contribute or receive. Generally, they said, $10 billion would come from nations that are members of the G-8 industrial nations - the United States, Britain, France, Canada, Russia, Germany, Italy and Japan.

Another $10 billion would come from wealthy Persian Gulf countries, including Saudi Arabia, and $20 billion more would come from agencies such as the World Bank and the African Development Bank.

Outside aid groups questioned the value of the package because the G-8 is behind on previous financial pledges, according to .