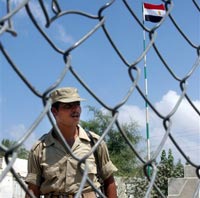 Egypt permanently reopened its border crossing into Gaza on Saturday, opening the door for Palestinians to the outside world and raising fears among Israelis of an increase in militant attacks.

Hundreds were expected Saturday to pass through the Rafah border, which had been blockaded by Egypt and Israel after Hamas, an Islamic militant group, took control of Gaza in June 2007. The closure of the border was an attempt by both countries to cut off Hamas, though it simultaneously created an economic hardship in Gaza by limiting shipments of goods in and out of the country, according to .

About 300 Palestinians crossed into Egypt this morning, and "it was smooth and easy," said a Hamas police officer at the crossing who gave his name only as Abu Osama. "If the situation remains as smooth as it was today, I don't see any future problems."

Egypt's decision to scale back crossing restrictions for the Gaza Strip has been welcomed by the Hamas Islamic movement, which controls the Palestinian enclave, while raising concern in Israel that the wider border access poses a security threat, says.

Israel and Egypt imposed the blockade after Hamas seized control of Gaza in June 2007. The closure, which also included tight Israeli restrictions at its cargo crossings with Gaza and a naval blockade, was meant to weaken Hamas, an Islamic militant group that opposes peace with Israel.

But since the ouster of Egyptian President Hosni Mubarak in February, Egypt's new leadership has vowed to ease the blockade and improve relations with the Palestinians.

The Rafah border terminal has functioned at limited capacity for months. Travel has been restricted to certain classes of people, such as students, businessmen or medical patients. And the crossing was often subject to closures. Travel through Israel's passenger crossing with Gaza is extremely rare, reports.