Serbian court allow to extradite of Ratko Mladic to The Hague 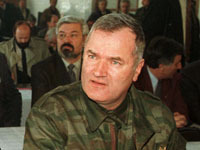 A Serbian judge gave preliminary approval on Friday to transfer Ratko Mladic to The Hague to be prosecuted for war crimes, including genocide. But his lawyer said he would appeal to block the transfer, saying Mr. Mladic's health was too frail to face trial.

Mr. Mladic, arrested Thursday after almost 15 years on the run, was a Bosnian Serb military leader during the bitter Balkan wars of the 1990s and is accused of being responsible for some of those wars' worst atrocities, including the massacre of 8,000 Muslim men and boys in Srebrenica in 1995, reports.

Mladic now has three days to appeal the decision.

Mladic's son, Darko, told reporters that his father was "very, very frail," with the right half of his body numbed. He called for independent medical experts to examine his 69-year-old father, says.