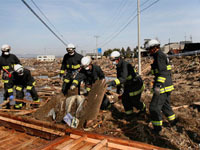 Japan will pay schools near the quake-ravaged Fukushima nuclear power plant to remove radioactive top soil and set a lower radiation exposure limit for schoolchildren after a growing outcry over health risks.

The Education Ministry triggered protests in April when it set a radiation exposure limit for children of 20 millisieverts per year, the same dosage the International Commission on Radiation Protection recommends for nuclear plant workers, reports .

"You can see there might be considerable number of leukemia cases," said National Cancer Institute Kiyohiko Mabuchi. He added that the estimate was very rough, based on the assumption that the non-evacuated population of Fukushima prefecture - nearly 2 million people - stays put for the next decade. The case figure was derived from scientists' understanding of radiation's dangers gleaned from studies of Japanese atomic bomb survivors, informs .

The IAEA team has members from 12 countries and is led by the U.K.'s heard nuclear safety inspector, Mike Weightman. The group also made an inspection tour of Japan Atomic Power Co.'s Tokai plant northeast of Tokyo yesterday. The Tokai nuclear station shut down automatically after the quake.

The mission will finish on June 2, according to a statement posted on the IAEA website. The team will prepare a report for a ministerial conference on nuclear safety in Vienna on June 20, says .