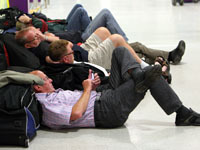 The European Union says ash from an Icelandic volcano could soon affect the airspace over Britain and Ireland. It was not immediately clear whether flights to and from affected areas would be disrupted.

The EU says the ash could enter British and Irish airspace Monday or Tuesday. Spokeswoman Helen Kearns noted that differences in the nature and size of the ash cloud meant that "we are far from where we were a year ago," when an Icelandic volcanic disrupted much of the air traffic over Europe, according to .

Even Barack Obama will be cutting his visit to Great Britain short by one day, due to concerns over the volcanic ash.

A number of flights have been cancelled but the airlines serving the affected areas have called a meeting with the Civil Aviation Authority (CAA) and the International Air Transport Association (IATA) claiming that the precaution over the volcanic ash, while understandable, is not necessary.

The cancellations are costing the airlines millions of dollars, while airports themselves remain open, under the regulations, the airlines are not permitted to send travelers to certain destinations, reports.

Four-hundred passengers were forced to spend Monday night at the Edinburgh airport, and the European air traffic agency says as many as 500 flights could be cancelled by Tuesday night.

The powerful eruption in Iceland is now raising fears of a repeat of last year, when ash from another volcano cancelled thousands of flights, stranding ten million travelers for five days.

The Geneva-based International Air Transport Association says it's "astonishing and unacceptable" that Britain's aviation regulators do not have their own Cessna aircraft to gather data on the ash plume, says.