President Barack Obama to meet the Queen at Buckingham Palace 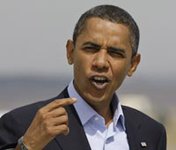 Barack Obama will meet the Queen at Buckingham Palace today as the US president's state visit to Britain formally begins to cement what the countries' elected leaders describe as "an essential relationship".

The palace said the Duke and Duchess of Cambridge, who have returned from their honeymoon in recent days, will also meet the president and the first lady, Michelle, according to.

Yet Obama arrives as Britain is attempting to balance financial constraints against a still ample desire for global influence - an influence bought in large part through its strategic and military alliance with the United States. Perhaps foreshadowing an election season debate in the United States about the cost of America's own projections of power overseas, the British are wondering whether their deeply indebted nation can maintain its substantial international role.

"The British problem isn't a lack of ambition, but to be blunt, it's that we've run out of cash," said Nick Kitchen, a professor of international affairs at the London School of Economics,  reports.