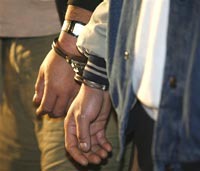 A criminal court in Cairo sentenced to death a police officer for killing protesters, the first such penalty to be handed down following the revolution that ousted former president Hosni Mubarak, Egyptian state TV reported Monday.

The court sentenced Mohammed Mahmud Abdul Mun'em in absentia for killing 20 protesters and wounding 15 on January 28 -- one of the pivotal days of the revolution that saw hundreds of thousands take to the streets and Egyptian troops replace police who had been battling demonstrators, according to .

The sentence, which Interior Ministry officials said was given to an officer named Mohamed Ibrahim Abdel Monem, is not final and reflects in part his failure to appear at trial. If he is found or appears, he will have the right to appeal and will probably receive a new trial, where he can present evidence in his own behalf.

But the sentence is the latest indication that Egyptian courts are willing to deal severely with former officers and officials of the government of Hosni Mubarak, the ousted president.

As many as 100 police officers have been detained on allegations of having shot protesters during the revolution, and dozens of senior Mubarak government officials are in custody awaiting hearings on charges of stealing public money, including the former president and his two sons, reports.

According to Amnesty International, a non-profit human rights organization, at least 840 people were killed and more than 6,000 wounded during the demonstration. Many died from gunshot and others wounded from head to chest, Amnesty International said in a report released this month.

There were many cases of torture of protestors which includes beating with sticks or whips, electric shock and rape threats, according to the report. Amnesty International calling for an investigation said, at least 189 prisoners died during the demonstration, reports.