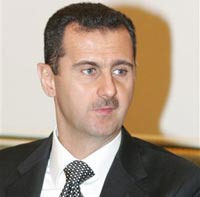 The younger brother of President Bashar al-Assad headed a list Tuesday of 13 Syrian officials subjected to European Union sanctions for their roles in violence against protestors.

Maher al-Assad, 43, was described as "strongman" of the Republican Guard and the "principal overseer of violence against demonstrators" on the list published in the EU's Official Journal.

He was joined by the head of the intelligence service, General Ali Mamluk, 65, and the new Interior Minister Mohammed Ibrahim al-Shaar, who were also blacklisted for being "involved in violence against demonstrators."

The Syrian president was not hit by sanctions himself due to divisions within the EU, diplomats said, reports.

The identities of the 13 Syrian officials covered by the asset freezes and travel bans as well as the details of the EU sanctions and arms embargo are due to be published in the Official Journal on Tuesday, when the measures will come into force.

The EU move comes amidst reports that Syrian troops have surrounded a western suburb in the country's capital city of Damascus and are carrying out a door-to-door crackdown as part of efforts to quell the ongoing popular unrest against the regime of President Assad.

Syrian forces have stepped up their campaign against anti-government protesters across the country since Sunday. The official Sana news agency says security forces are in pursuit of "armed terrorist groups" in the cities of Deraa, Homs and Baniyas, according to .