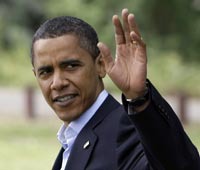 President Obama officially announced Thursday the shuffling of his senior national security team, naming a quartet of diplomatic, intelligence and defense officials to help manage the final stage of two wars, a tumultuous Middle East and a politically charged debate over the federal budget that will touch all agencies.

In an East Room ceremony, Obama called his four nominees - Leon E. Panetta as Defense secretary; Lt. Gen. John R. Allen as commander of international forces in Afghanistan; Gen. David H. Petraeus as director of the Central Intelligence Agency; and Ryan C. Crocker as ambassador to Afghanistan - as "leaders of enormous integrity and talent who have devoted their lives to keeping our nation strong and secure," according to .

When President Obama unveiled his revamped national security team in the East Room, he quickly joked about how badly Defense Secretary Robert Gates has been itching to finally get serious about retirement.

"When I took office, Bob Gates had already served under seven presidents, and he carried a clock that counted down the days, hours, and minutes until he could return to Washington state with his wife, Becky," Obama said. He added that he felt lucky to get Gates to keep pushing the exit date back to deal with wars in Afghanistan and Iraq as well as some major budget decisions confronting the nation, reports.