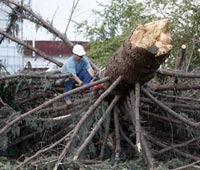 Killer tornadoes and thunderstorms tore through the southern United States on Wednesday, leaving at least 83 dead, hundreds injured and a wide swath of destruction in their wake.

Hardest hit was Alabama where 61 people died, most when a mile-wide tornado gouged its way across the state, according to.

In confirming a State of Emergency for Alabama, US President Barack Obama said federal officials had their eye on the storms and would offer help as needed.

He stated: "Michelle and I extend our deepest condolences to the families of those who lost their lives because of the tornadoes that have swept through Alabama and the southeastern United States," he said in a written statement. "Our hearts go out to all those who have been affected by this devastation, and we commend the heroic efforts of those who have been working tirelessly to respond to this disaster."

Elsewhere, at least 11 people have been confirmed dead in Mississippi, four in Georgia and one in Tennessee.  The weather system moved into Georgia, Tennessee and Kentucky overnight and into the Carolinas this morning, reports.