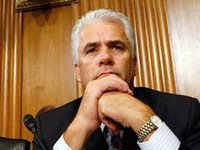 Nevada Sen. John Ensign on Thursday announced that he is resigning his Senate seat, effective May 3, bringing to an end a once promising career that imploded following a seedy sex scandal.

Ensign has been under investigation by the Senate Ethics Committee over whether he violated Senate rules during his affair with Cindy Hampton, a former campaign aide. Hampton's husband, Doug Hampton, was Ensign's deputy chief of staff during most of the extramarital relationship.

"It is with tremendous sadness that I officially hand over the Senate seat that I have held for eleven years," Ensign said in a statement issued Thursday evening. "The turbulence of these last few years is greatly surpassed by the incredible privilege that I feel to have been entrusted to serve the people of Nevada. I can honestly say that being a United States Senator has been the honor of my life,"  reports.

Before becoming the 24th U.S. Senator for Nevada, Ensign had worked as a veterinarian and small business owner. Ensign was first elected to the U.S. Senate in 2000. He had served as a member of the U.S. House of Representatives between 1995 and 1999.

He had unsuccessfully run a Senate race in 1998 when he was defeated by current Senate Majority leader Harry Reid. However, the two went on to develop good relationship. In 2006, Ensign defeated Jack Carter, son of former president Jimmy Carter to win a second term in the US Senate, reports.