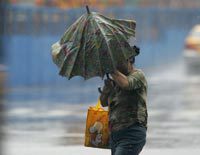 The Guangdong provincial government has dispatched a team to the disaster-affected areas to direct relief work, according to

Till late Sunday, the disaster affected over 500 hectares of farmland and caused about 50 million yuan ($7.65 million) in economic losses, the ministry of civil affairs said.

In the southwestern province of Guizhou, hailstorms affected the lives of over 270,000 people in 10 counties during the weekend and causing economic losses worth 75 million yuan, authorities said, reports.