Italy's Berlusconi may not run for 2013 elections 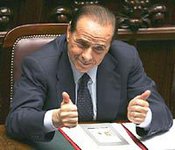 Italian Prime Minister Silvio Berlusconi has said he may not stand for re-election in 2013 but could play a behind-the-scenes role as a kind of father figure to the centre right.

In remarks to a group of foreign journalists in Rome, the 74-year-old premier said he would see out his current term but might not run again when it expires. He also said he would not seek to stand as president of the republic, reports.

Mr Berlusconi, one of Italy's richest media entrepreneurs as well as its dominant political leader, said he could imagine acting as a patron or father figure for the ruling PDL party without a direct executive role.

A final decision would depend on opinion polls, he said.

He indicated justice minister Angelino Alfano was a potential successor and put forward the name of his trusted chief of staff, Gianni Letta, as a possible future head of state to succeed Giorgio Napolitano, informs.