Egypt's toppled president Mubarak and his sons to be arrested 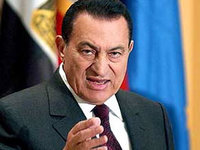 Egypt's top prosecutor has ordered former President Hosni Mubarak and his sons detained for 15 days for questioning about the origins of their family's wealth, Egypt's state-run television station reported Wednesday.

The news comes a day after the former president was hospitalized in the Red Sea resort of Sharm el-Sheikh, just as prosecutors had moved to interrogate him and his sons regarding allegations of corruption. There were conflicting reports about his ailment and the condition of his health, and for a time on Tuesday, his whereabouts.

On Wednesday, however, Egyptian media said Mubarak remained hospitalized at Sharm el-Sheikh International Hospital, where he could be questioned. Protesters had begun to gather in the town, the government media reported, according to .

A statement from the prosecutor general's office announcing Mubarak's detention was posted on the social networking site Facebook early Wednesday. It said the ongoing investigation was into allegations of assaults, killings and injury of protesters, corruption, squandering of public funds, and the abuse of authority for personal gain.

"The prosecutor general orders the detention of former President Hosni Mubarak and his sons Gamal and Alaa for 15 days pending investigation," read the statement. The Facebook page was set up as an outreach from the Justice Ministry to the families of those killed and injured during the 18 days of protests that ousted Mubarak in mid-February.

Most of the top officials of Mubarak's regime are now being investigated on allegations of corruption and abuse of authority. Although Iraq's Saddam Hussein and his close aides were prosecuted and many of them hanged after the U.S.-led invasion, legal moves against an ousted Arab leader without any foreign role in the proceeding has been unheard of in modern times,  reports.