Japanese officials unveil important information they concealed for a month 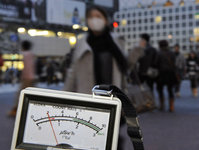 Japanese officials struggled through the day on Tuesday to explain why it had taken them a month to disclose large-scale releases of radioactive material in mid-March at a crippled nuclear power plant, as the government and an electric utility disagreed on the extent of continuing problems there.

The government announced Tuesday morning that it had raised its rating of the severity of the accident at the Fukushima Daiichi Nuclear Power Station to 7, the worst on an international scale, from 5. Officials said that the reactor had released one-tenth as much radioactive material as the Chernobyl accident in 1986, but still qualified as a 7 according to a complex formula devised by the International Atomic Energy Agency, according to .

The operator of Japan's crippled nuclear plant said on Wednesday it was still working on a detailed plan to end the country's nuclear crisis a month after it began, as tests showed radiation levels in the sea near the plant had spiked.

Engineers moved a step closer to emptying highly radioactive water from one of the six crippled reactors, which would allow them to start repairing the cooling system crucial to regaining control of the reactors.

Japan's nuclear safety agency said the latest tests showed radiation nearly doubled last week, to 23 times above legal limits, in the sea off Minamisoma city near the plant, according to .