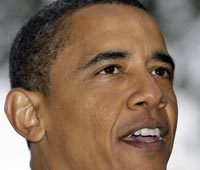 President Barack Obama said he wanted to rekindle the "passion and energy" of his 2008 campaign as he joined supporters on a conference call that capped a daylong organizing effort for his 2012 re-election bid.

"We can't go backwards," he said on the call last night, which was also broadcast on his campaign website. "We have to preserve the progress that we've made and take it to the next level, and that means that we're going to have to mobilize," according to BusinessWeek.

Obama faces a far different dynamic than he did in 2008, when he ran as an underdog outsider promising hope and change. Many who backed Obama then have soured after two years of difficult and, often, unpopular decisions on the economy, war, energy and a host of other issues.

"The good news is that he's close to 50 percent, no opposition in the primaries, he can raise an unlimited amount of money, his base is pretty solid," said Doug Schoen, a Democratic pollster who was a top adviser to President Clinton. "The bad news is independents have gotten away from him, the economic climate we are facing is pretty grim and we are fighting three wars," Washington Post reports.