US to pull warplanes from front-line missions in Libya 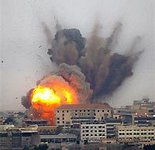 The U.S. military will pull its warplanes from front-line missions Monday and shift to a support role in the Libyan conflict, a NATO official said.

Britain, France and other NATO allies will now provide the fighter and attack jets to conduct intercept and ground attack missions as they enforce a no-fly zone over this North African country.

The hand-over is expected to take place later on Monday, a NATO official said.

"There won't be a capabilities gap," said the official who spoke on condition of anonymity because of regulations.

Last week, Secretary of Defense Robert Gates told Congress the U.S. would continue to provide assets that others don't have in sufficient numbers. These will likely include AWACS air surveillance planes, electronic reconnaissance aircraft and aerial refueling tankers, according to Huffington Post.

U.S. and British officials have said they have not decided whether to arm rebel fighters. Both countries participated in airstrikes to weaken Gadhafi's military resources before NATO officially took command of the international operation.

Due to poor weather conditions in recent days, the United States approved a request by NATO to extend the use of some U.S. strike aircraft, NATO spokeswoman Oana Lungescu said Sunday.

"This is a short-term extension, which expires on Monday," Lungescu said.