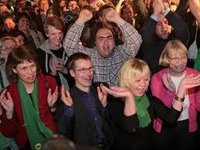 The German Chancellor's political party has lost control of her home state in an embarrassing electoral reverse that signals widespread discontent with her leadership.

The Conservatives lost control of Baden-Wuerttemberg for the first time in almost 60 years, ceding it to the Green Party in a local election. It is the first time the Greens have won a state premiership, and they hailed it as a momentous result, Sky News reports.

The anti-nuclear Greens party were the shock winners of the election in Baden-Wuerttemberg, Germany's richest state which was ruled by the CDU for 58 years. Outgoing CDU state premier Stefan Mappus was a leading advocate of nuclear power.

The Greens, once a small fringe party, will now lead the government in one of Germany's 16 federal states for the first time, in coalition with the centre-left Social Democrats (SPD).

The leader of the SPD, Sigmar Gabriel, urged Merkel to draft a new law to end nuclear power in Germany by 2020, Reuters says.