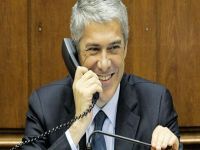 The Prime Minister of Portugal, José Sócrates, has resigned after all the opposition parties in the Portuguese Parliament refused to accept the fourth version of the Stability and Growth Program.

The collective will of the Portuguese opposition parties represented in Parliament (PSD - Social Democrats - centre-right; CDS-PP - conservatives/Christian Democrats; CDU - Communists and Green Party and Bloco de Esquerda - Left Block coalition) was that they could not associate themselves with a fourth successive austerity package which is pushing Portuguese society to the limits.

The result is that Prime Minister José Sócrates has recognised that he does not have the conditions to govern and so has presented his resignation to the President, Aníbal Silva, who accepted it.

The most probable scenario now is new elections.