Two US airmen eject from F-15E fighter jet over Libya 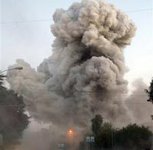 Two US airmen were forced to eject from their F-15E fighter jet over Libya on Monday night after an apparent mechanical failure, the US military said.

The wreckage of their F-15E Strike Eagle jet, which crashed at 9.30pm GMT, was found near Benghazi, according to The Guardian.

The US military confirmed that one of its jets had crash landed but said that it had not been shot down.
Vince Crawley, a spokesman for the US military's Africa Command, said that one crewman had been recovered and one was "in process of recovery".

Crawley said the crash occurred "overnight." He declined to give the location of the incident and also would not say how the rescued crewman was picked up.

This is the first coalition aircraft to have crash landed during the Libyan conflict following the third night of air strikes, Telegraph.co.uk reports.