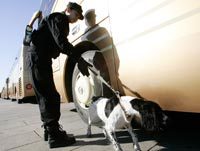 A book bomb has been sent to music mogul Ahmad Dhani, the police said on Thursday, in what appears to be the latest in a string of attempted book-bomb attacks in Jakarta.

"We have disposed of the bomb with the help of the bomb squad," he said, Jakarta Globe reports.

Home Affairs Minister Brendan O'Connor has described a string of attempted bombings in Jakarta in the past three days as a worrying trend after police disarmed a fourth device, sent to the home of a recording artist.

Mr O'Connor has been in Jakarta since Tuesday for meetings on issues related to transnational crime, including terrorism.

The latest bomb, sent to the house of Ahmad Dhani in the upmarket suburb of Pondok Indah, is the fourth device located this week after three were found on Tuesday, including one which injured four people when it exploded as police were trying to disarm it, according to NEWS.com.au.