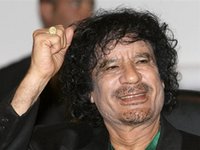 The Group of Eight (G-8) nations were not able to agree yesterday, after negotiations in Paris, on the issue of a no-fly zone over Libya. Intended to shield civilians and opposition forces from Col. Muammar Gaddafi, the measure was strongly supported by France and the United Kingdom, while Germany and Russia led the opposition.

The United States has, thus far, been hesitant to support intervention. The Daily believes that the Obama administration should not support a no-fly zone.

President Barack Obama has stated his desire to see Gaddafi leave office and allow for a transfer of power. Though he has been cagey in his response, he has reportedly been considering, in addition to the no-fly zone, aerial surveillance, humanitarian assistance and tougher enforcement of an arms embargo that was passed by the U.N. Security Council two weeks ago, according to Tufts Daily.

Alain Juppé, the French foreign minister said: "If we had used military force last week to neutralise some airstrips and the several dozen planes that they have, perhaps the reversal taking place to the detriment of the opposition wouldn't have happened.

"We have perhaps missed a chance to restore the balance."

Col Gaddafi, in an interview, said Germany, Russia and China would now be rewarded with business deals and oil contracts, Telegraph.co.uk reports.