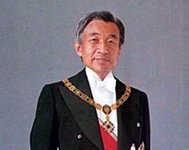 Emperor Akihito of Japan, in an unprecedented television address to the nation, said on Wednesday that he was "deeply worried" about the ongoing nuclear crisis at several stricken reactors and asked for people to act with compassion "to overcome these difficult times."

An official with the Imperial Household Agency said that Akihito had never before delivered a nationally televised address of any kind, not even in the aftermath of the Kobe earthquake in 1995 that killed more than 6,000 people. The address was videotaped.

The remarks on Wednesday afternoon were the first public comments from Akihito, 77, since a devastating earthquake and tsunami struck northern Japan last Friday, and they underscored the urgency of multiple crises confronting the country. Akihito expressed his concern for the survivors of the disaster and thanked the rescue teams working under difficult conditions in the north, according to New York Times.

He also expressed his concern over the risk of nuclear radiation spreading from the Fukushima 1 plant 240km from Tokyo. The emperor said :" I am deeply concerned about the nuclear situation because it is unpredictable. With the help of those involved I hope things will not get worse".

The emperor also passed on his condolences to the families of the dead and missing saying :" We don't know the number of victims, but I pray that every single person can be saved".

Japanese officials have announced that the official death toll from the quake and tsunami last Friday has topped 11,000. A further 7,500 remain unaccounted for, NewsTime reports.