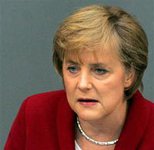 On Tuesday morning, German Chancellor Angela Merkel was caught off guard by the sudden resignation of Defense Minister Karl-Theodor zu Guttenberg. On Tuesday evening, she went on the offensive. And on Wednesday, she planned to name a new defense minister.

Interior Minister Thomas de Maizière will take over at the Defense Ministry while his position will be filled by Hans-Peter Friedrich, a senior member of the Christian Social Union (CSU), the Bavarian sister party to Merkel's Christian Democrats and Guttenberg's political home, Spiegel Online reports.

Merkel said the CDU should not let anyone tell them what integrity and honor means. "Rarely has Germany seen so much self-righteousness and dishonesty," the chancellor said.

The leader of the opposition Social Democrats, Sigmar Gabriel, praised the criticism of Guttenberg that came from within the CDU and kept up the growing barrage of follow-on attacks on Merkel over her handling of the affair. He told the Passauer Neue Presse regional newspaper that Merkel's conduct throughout the affair had trivialized the importance of political office.

"Angela Merkel has given the impression that government members are above the law," he said, Deutsche Welle informs.