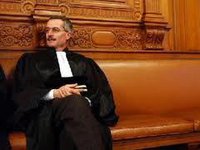 Judges in France are to stage an historic first strike today in protest at comments made about the judiciary system by President Nicolas Sarkozy. The country's courthouses have been shut down in the row which centres around the murder of a teenage waitress, whose severed limbs and head were found in the waters of an abandoned quarry.

The suspect in the case, a 31-year-old man recently released from prison and with 15 previous convictions on his record, was promptly brandished a 'monster' by Sarkozy who he 'presumed guilty', according to Daily Mail.

On Feb. 7, Prime Minister Francois Fillon called the magistrates' reaction "excessive." Government spokesman Francois Baroin softened the government's tone today, saying that being a magistrate "is a difficult job" and that it would be up to legal system to decide if faults had been committed in the handling of the suspect.

Sarkozy will be questioned on television by a panel of voters for 90 minutes tonight, Bloomberg says.