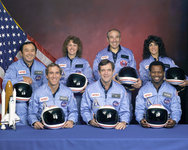 Twenty-five years ago Friday, the space shuttle Challenger vanished from the blue Florida sky, leaving only white corkscrews of smoke hanging in the air.

Challenger's disintegration 73 seconds after liftoff took the lives of high-school teacher Christa McAuliffe and six fellow astronauts, who perished in front of their families, friends and schoolchildren watching at Cape Canaveral and on live television across the nation.

Afterward, President Reagan told a shocked and grieving nation that the legacy of the accident would not be curtailed ambition for the space program, but accomplishments that would have made Challenger's crew proud, according to USA Today.

Heflin, associate director-technical at Johnson Space Center, worked at mission control as a flight controller during the disaster but wasn't assigned to Challenger's mission.

"Even though I wasn't working the flight, I should have had a hungriness to sort through what happened," Heflin said. "We have to make sure that we stay hungry, that we ask hard questions and continue to pay attention to detail."