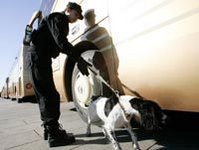 A bomb exploded in Davos on Thursday, Jan 28 near a hotel, where top executives and the world leaders gathered for a meeting. No body was injured in this incident but the blast broke window at the hotel. Left-wing activist bared responsibility for this explosion, reports said.

The bomb exploded three hours before the Colombian President Juan Manuel Santos was scheduled to speak. Despite the bomb blast he delivered the speech on the scheduled time.

The blast did not affected the main programmes at the World Economic Forum (WEF) Meeting, which was addressed by French President Nicolas Sarkozy and former US President Bill Clinton on Thursday, according to Oneindia.

A group calling itself Revolutionary Perspective said in a statement on an activist website it had targeted the luxury Posthotel with a firebomb and said Swiss ministers and representatives of top bank UBS were staying there.

"Our fight against the dictatorship of capital is focused on the social alternative to capitalism: communism," the group said in the statement.

A spokesman for the World Economic Forum (WEF) said police had made two bomb sweeps of the hotel after an online threat, Reuters informs.