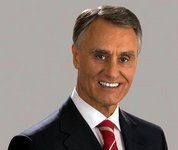 Portuguese President Anibal Cavaco Silva, 71, a former premier and economist, won election to a second term as the country struggles to avoid following Greece and Ireland in requesting a bailout.

Cavaco Silva, backed by the opposition Social Democratic party, yesterday grabbed more than the 50 percent of the vote needed to win outright and avoid a runoff. Manuel Alegre, a candidate supported by the Socialist Party of Prime Minister Jose Socrates, was second, with 19.75 percent of the vote, according to the government's election results website, Bloomberg reports.

"I will be a reference of confidence, stability and solidarity, without abdicating the powers that the consitution gives me," Cavaco Silva said after the vote.
Cavaco Silva's nearest rival, Manuel Alegre of the ruling Socialists, had garnered only around 19 percent of vote.

Although Cavaco Silva's party, the Social Democrats, are in opposition, his reelection should provide a much-needed boost for the minority Socialist government of Prime Minister Jose Socrates, who said that "the Portuguese voted for no change, for continuity and for political stability," according to Deutsche Welle.