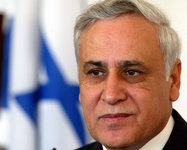 Former President Moshe Katsav of Israel was convicted of two counts of rape by a Tel Aviv court on Thursday, capping a four-year spectacle that began with accusations of sexual misconduct against him while he was still in office.

The charges related to the time when Katsav served as president and as tourism minister and were based on accusations brought by former employees in his offices. Katsav had claimed his innocence and accused prosecutors of maligning his character to turn the public against him. Katsav can appeal the ruling. The minimum sentence for rape is four years.

"The court today delivered two clear messages, one being that everyone is equal in the eyes of the law and the second the right of every woman to be in control of her own body," Prime Minister Benjamin Netanyahu said in a text message.

Katsav stepped down as president, a mainly ceremonial position, in January 2007 after Attorney General Menachem Mazuz first said there was evidence for an indictment. In 2008, he rejected a plea agreement that would have allowed him to avoid indictment.

Shimon Peres, the former Israeli prime minister who shared the Nobel Prize for pursuing peace with the Palestinians, succeeded Katsav as president, according to Bloomberg.