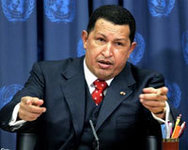 The United States has withdrawn the visa of Venezuela's ambassador to Washington, in retaliation for the rejection by Caracas of President Obama's choice of US ambassador. The State Department said Venezuela had brought the measure upon itself.

The move by Washington effectively expels Bernardo Alvarez Herrera. He is thought to be still in the US but the move means he can't return there.

Earlier this week Larry Palmer was blocked from becoming US ambassador to Caracas, euronews reports.

Chavez, who has long been at loggerheads with the U.S., denouncing "American imperialism," was angered by Palmer's comments at the Senate Foreign Relations Committee that the Venezuelan Army has low morale and that Caracas has "clear ties" with terror organizations in neighboring Colombia.

Chavez accused the former U.S. Ambassador to Honduras of "violating the most elemental international laws and conventions" by openly criticizing Venezuela.

Mark Toner, deputy spokesman of the U.S. State Department, described the action as "appropriate, proportional and reciprocal," according to RTTNews.