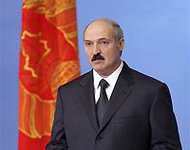 Russia and the European Union are closely monitoring the election, having offered major economic inducements to tilt Belarus in their direction.

Mr Lukashenko in recent years has argued intensively with the Kremlin, his main sponsor, as Russia raised prices for the below-market gas and oil on which Belarus' economy depends. However, his tone changed this month after Russia agreed to drop tariffs for oil exported to Belarus - a concession worth an estimated four billion dollars (£2.5 billion) a year.

Mr Lukashenko has also recently been working to curry favour with the West, which harshly criticised his 16-year rule for human rights abuses and repressive politics. Last week, he called for improved ties with the US, which in previous years he had cast as an enemy. But the violent dispersal of opposition protests makes a rapprochement with the West unlikely, The Press Association reports.