Public transport on strike in Greece 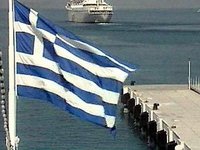 All public transport is on strike today in Athens and all major Greek cities after yesterday's general strike against austerity measures with violent demonstrations and various incidents.

Starting this morning and for the next 24 hours, the underground, buses and trains are on strike against the reforms and privatisations in public transport as part of the anti-crisis plan, according to Greek Reporter.

The country's journalists meanwhile called a new 48-hour strike for Friday and Saturday, causing a news blackout for TV, radio and internet services and newspapers will not be published.

The latest series of strikes follows a nationwide 24-hour strike on Wednesday. Violent clashes broke out in Athens as some 20,000 protesters demonstrated against new labour reforms in the debt-ridden country.

That strike saw all schools, hospitals and public sector services shut down in protest after parliament passed a new round of austerity reforms as part of conditions set by a $146bn international bailout.

Athens is implementing a wave of economic reforms as part of a bid to slash public spending in exchange for a rescue package from the European Union, European Central Bank and International Monetary Fund (IMF), News24 reports.