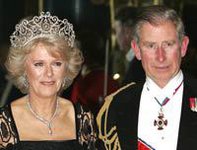 The heir to the throne and his wife, Camilla, the Duchess of Cornwall, who were both in the car, were unharmed. The limousine, bearing the royal coat of arms, had paint thrown at it in the Regent Street area of the West End at around 7:30 p.m. as the couple were being driven to a show at the Palladium Theatre, 30 minutes walk from Parliament.

The attack took place as thousands of students staged demonstrations around Parliament against the increase in tuition fees, according to Bloomberg.

David Cameron, the Prime Minister, said the violence was "unacceptable".

He added: "It is shocking and regrettable that the car carrying the Prince of Wales and the Duchess of Cornwall was caught up and attacked in the violence."

Theresa May, the Home Secretary, said: "I utterly condemn the increasing levels of violence and disorder that some of the protesters have been, and still are, involved in", Telegraph.co.uk reports.