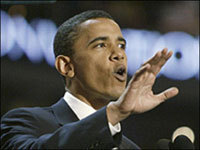 President Barack Obama ran into objections from congressional Democrats on Monday to an emerging year-end agreement with Republicans that extends income tax cuts to the wealthy as well as the middle class and grants additional relief to large estates.

Other elements of the possible agreement included a cut in workers' Social Security taxes and an extension of unemployment benefits for the long-term jobless, according to BusinessWeek.

Obama said he did not like some elements of the framework, but he had agreed to it to avoid having taxes increase for middle-class Americans at the end of the year. He said that in return for agreeing to Republican demands that income tax rates not go up on upper-income brackets, he had secured substantial assistance to lower- and middle-income workers as well as the unemployed.

"It's not perfect, but this compromise is an essential step on the road to recovery," Obama said. "It will stop middle-class taxes from going up. It will spur our private sector to create millions of new jobs and add momentum that our economy badly needs," Kansas City Star reports.