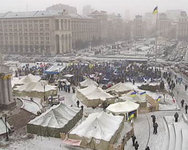 Ukrainian police early on Friday broke up an encampment of small business owners who had been protesting in Kiev's city centre against tax reform. President Viktor Yanukovich said the police action was justified after parliament, at his instigation, on Thursday revised a proposed tax code to take account of protests from the small business community.

Civilian workers, backed up by a force of about 250 police including riot police, moved into the "tent city" on Kiev's Independence Square at around 5 a.m. (0300 gmt), police said. They dismantled tents and took down placards denouncing the new tax plans, Reuters says.

The government needs the tax code approved as soon as possible to ensure revenue for the 2011 budget, which must have a deficit equal to no more than 3.5 percent of gross domestic product to comply with International Monetary Fund demands.

Ukraine is relying on a $15.2 billion loan program with the Washington-based lender as it seeks to spur economic growth after the country's first recession in a decade, Bloomberg informs.