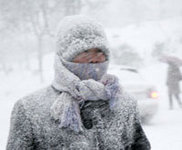 Geneva, a major hub for low-cost carrier Easyjet, was forced to shut as staff struggled to clear runways of snow. Chambery and Grenoble airports in south-eastern France were also closed.

About half of Thursday's Eurostar services connecting London with Paris and Brussels are being cancelled. Wednesday also saw cancellations and delays of up to 90 minutes.

The worst winter weather in Britain for almost two decades has covered much of the country in snow.

Thousands of schools are closed; Edinburgh airport has been shut until at least Thursday morning, as has London's Gatwick, one of the country's busiest.

Police nearby described conditions as the worst they had ever known, euronews reports.